“Vero is a social network for anyone who loves anything enough to share it – and wants control over who they share it with. Just like we do in real life.”

As you might have seen, the new App, Vero, is slowly taking the world by storm now. You may also have seen your favorite creator post about this already.

Vero is much alike Instagram when it comes to posting and they claim that they are not going to mess with algorithms, which has been a large problem both on Facebook and Instagram for the past 2 years – and an especially tremendous problem for the past year.

My main following base is on Facebook. I have 390k followers and I know that I, as well as many others, have been affected. Instagram is gradually changing too, as they are owned by Facebook – they’ve actually announced that they’re gradually introducing the same algorithms that so drastically limit the reach of pages, and makes it especially hard for creators.
Every time I post, Facebook asks me to boost the post for more likes, which means that I would be spending money on every post to reach my followers – which I don’t. Cosplay is already expensive enough as it is – as I assume most other artistic pursuits are. If it was 5-10 dollars a month to “gain access” to my followers, I might consider it, but so far I have never done it.
Many many other creators have gotten together to discuss their problems and have repeatedly voiced their concerns, but so far Facebook has done nothing.

My first impressions on Vero: 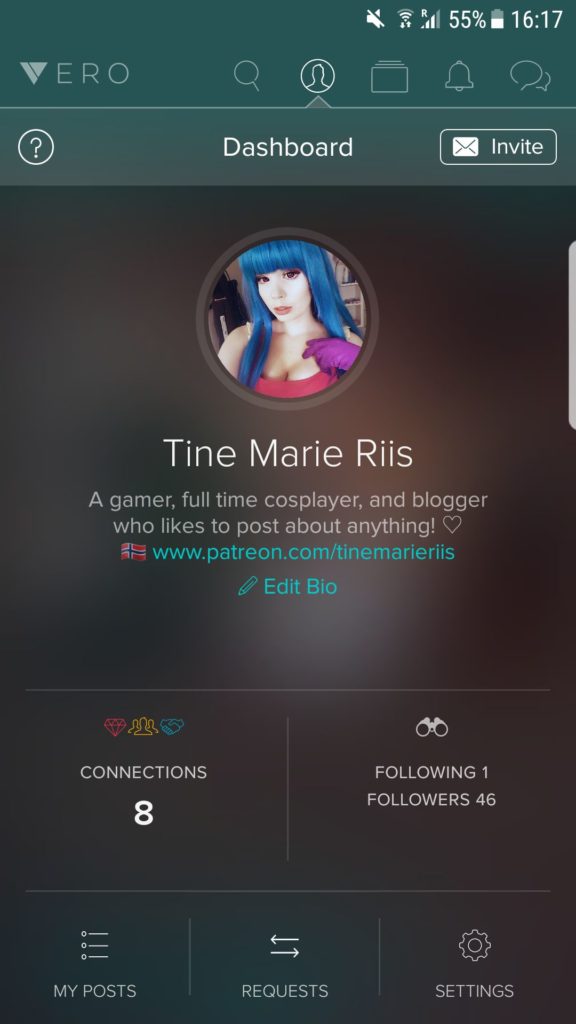 It is very easy to get used to it! First of all you can sort people out by either “Follow” or add them as acquaintances, friends or close friends.  When you decide to make a post, you can decide which one you would like the post to be shown for. However, Vero is still in the beta stage, and it only wants you to highlight every single one for now if you want to share with your “Followers”.

Then again, this app is still in beta. I bet they are already hard at work on fixing this.

You can share pictures, Links, Music, Movie/Tv, Books and Places! So far it doesn’t seem like they have their own “Stories” like Insta/Snapchat, but maybe they will create something in the future?

I really enjoy their “Frontpage”. You can search whatever you’d like, and see popular hashtags that are currently trending. Overall it looks really good!

I have had Vero for only 1 day so far, and it is so much fun to use! Keep in mind that Vero did not pay me to write about their app. I just wanted to spread the word for people who have worked so hard on their past social media only to have it torn down by greedy platforms.

According to this interview, the app will be free for the first million who download it, after which it will operate with a subscription at “a few dollars a year”.

I’m excited to see what the future has to bring for Vero and I will keep you guys posted whenever something new happens with the App!

“There are no ads on Vero – just the posts you want to see. That also means there’s no algorithms and no data mining. Ever.”

Making of K/DA Kai’Sa from League of Legends!